The 3rd John Wick... If you are a fan of all the action and the character Keanu plays.... I will let the cat out of the bag.. You will not be disappointed.

Keanu showed out and I found out he still does 90% of his own stunts. Even as he is priming he moves pretty well.

Halle Berry aka Sofia kicks major booty. She handles the guns and the dogs like a pro. I just want to know... would you drink the water from the water bottle? eeeek 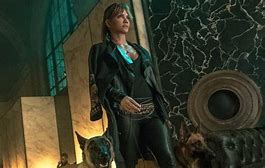 Let me tell you who else kicks butt!!!

The Doc who assists John is a straight trooper. I was like yep...nope... haha. To avoid death.. he almost died. You gotta go see to understand what I'm talking about.

THEN... there were the Horses and the Dogs. YO!! first off I was like they better not hurt any animals. I am so not a fan of animals dying in films especially how horses fall etc... Ok I digress. Anyway.. if you didn't like horses and dogs.. OHHHH you are gonna love 'em after this.

There were hoops and hollers, screams and DA-DAngs all through out the theater and movie.

It was an interesting story. If you have seen the previous 2, there is some tie in. Keanu aka John kills an important person of the High Table and now he has a bounty on his life. and not just any bounty... it started at $14mil. Ok... IM in.. haha

There were rotary phones, tons of tats and piercings in the office that looked like it was placed in the 50s and everyone had those weird push up phones.. The ones you know are only used as throw aways and for assassinations. The Adjudicator played by Asia Kate Dillon was a trip. I give her credit.. she was so unbothered. And Zero played by Mark Dacascos was super funny and a skilled fighter.

There was a lot happening and I was rooting for John and Charon. I wasn't sure how I felt about Lawrence Fishburnes altercation with the Adjudicator

I will say it is about 15-20 mins too long. But the fights were Great, the gun and animal scenes amazing and you get a chance to learn some great assassin vocabulary.

So what happens to John Wick? Is it over?